Get in touch with our Press teams

Olam International, a leading global agri-business operating across the value chain in 65 countries, is pleased to announce that the Olam International Prize for Innovation in Food Security has been awarded by an international jury panel to Professor Norman Uphoff and the SRI International Network and Resources Center (SRI-Rice) at the 3rd Global Science Conference on Climate Smart Agriculture in Montpellier, France.

Launched in partnership with leading scientific organisation Agropolis Fondation to celebrate Olam’s 25th anniversary year2, the Olam Prize for Innovation in Food Security recognises an outstanding innovation for its impact on the availability, affordability, accessibility or adequacy of food.

SRI-Rice, which is housed at Cornell University (New York), has been promoting research and facilitating knowledge-sharing on the System of Rice Intensification3, a climate-smart methodology with outstanding results for rice production that is surprisingly counter-intuitive.

Capitalising on biological processes, on the genetic potential of the crop, and on plant-soil-microbial interactions, the system requires 80-90% fewer rice seeds, up to 50% less water and in many instances no fertiliser.  Yields are then boosted by 20-50% (and often by much more), with farmers’ costs subsequently reduced by 10-20%.

SRI methods include alternately drying and wetting the rice field rather than the usual practice of continuous flooding, adding organic matter to soil for their improvement, and instead of planting  the standard of approximately 130 plants per m2,  about 16 single, very young seedlings are planted with much wider spacing. These carefully designed planting and growing practices produce deep-rooted rice plants with a greater amount and diversity of soil organisms. The healthier, more robust plants are better able to withstand the stresses of drought, flooding, storm damage, and pests and diseases.

Such has been its success that SRI today is now being promoted by governments in China, India, Indonesia, Cambodia and Vietnam, where two thirds of the world’s rice is produced. Use of SRI practices is increasing the yields of over 10 million smallholder farmers by an average of 1.67 tons per hectare, while simultaneously reducing their costs and lowering water requirements.

“The innovation behind SRI is fascinating because it disrupts common notions of rice farming, and such disruption is essential if we are to feed nine billion people by 2050. Grown by 200 million small-scale farmers, rice is the world’s staple diet, so I am delighted that Olam is helping to scale up practices so clearly proven to increase yields, thereby reducing the pressure on precious arable land and water. On top of this, there are no costs to the farmer which provides three benefits: firstly, communities have increased access to vital calories without paying more; secondly they can improve their livelihoods by selling the surplus and lastly, through that surplus they are supporting global food security needs.

Mr Verghese concluded, “As we celebrate our 25 years in the agricultural sector, I am proud that this anniversary prize should be awarded to SRI-RICE, a team that has ‘transcended boundaries’ – the meaning of Olam. And with our own 10,000 hectare rice farm and smallholder programme in Nigeria we will certainly be exploring this research further.”

In addition to the promotion of the new methodologies, SRI-Rice provides technical assistance to development and research programmes, advancing knowledge on SRI and acting as a global hub for the international SRI community.

“The SRI-Rice team stood out for the demonstrable impact their research and outreach on paradigm-shifting methodologies is having in over 55 rice-growing countries globally. Professor Uphoff and the SRI-Rice team at Cornell University are working with a vast global network to build a body of scientific evidence demonstrating that significant yields can be achieved from the same land by simply better understanding the natural synergies between plants, soils, water, nutrients, soil organisms and climate.”

“Along with the rest of the SRI-Rice team and the hundreds of colleagues all around the world who have made SRI a reality on the ground, I am honoured to receive this award from Olam, one of the world’s largest agribusinesses and a team that knows very well the importance of agricultural science to ensuring food security. However, this award must be dedicated to the memory of Père Henri Laulanie, whose ideas and observations working with impoverished farmers in Madagascar some 30 years ago provided the basis for all SRI research.

“Scaling up SRI and its derived System of Crop Intensification (SCI) is a matter of changing mindsets, habits and practices, and the recognition Olam has bestowed on us with this award marks a milestone in terms of support from the private sector. The Olam Prize money will be used to support further research, particularly around how SRI management methods can reduce methane gas emissions – essential in the fight against climate change – as well as on the role of soil microbes in the uptake of nutrients.”

With a prize value of US$50,000, the Olam Prize for Innovation in Food Security was judged by an international panel of experts4 in conjunction with the Louis Malassis International Scientific Prizes, the 2015 winners of which were also announced last night in Montpellier, France. The winners are:

To read more about the SRI system and to hear farmers talking about their success go to: Farming First: the story behind SRI

2To mark its 25th anniversary, Olam has launched four global initiatives aimed at helping address some of the global challenges facing the next generation.

These look beyond the commercial framework of Olam’s business, recognising the role the private sector has to play in helping to address global challenges including food, water and energy security, the impact of climate change, sustainable and inclusive growth, and good governance.

3 The method of System of Rice Intensification derives from the work of French priest-agronomist, Fr. Henri de Laulanié, SJ, active in Madagascar between1961-1995. Faculty and staff at Cornell University in New York began work on scientifically evaluating and verifying the results of the methodologies now known as SRI, and making knowledge of their results widely known. Since 2010, their research on SRI and the application of its methodologies to other food crops (SCI) has been conducted under the formal auspices of the SRI-Rice Center at Cornell.

4Jury members are appointed by the Chairman of the Board of Agropolis Fondation. The independent jury is composed of internationally recognized individuals acclaimed for their contribution to agriculture and food and knowledge of issues confronting the sector. The jury for the 2015 edition of the Louis Malassis and Olam Prizes were:

Back to News & Events
About the SRI-Rice Centre

The SRI International Network and Resources Center (SRI-Rice) was created at Cornell University in 2010 in response to the increasing importance of the System of Rice Intensification (SRI), a climate-smart, yield-increasing methodology that is being utilised around the world. The Center operates under the auspices of International Programmes of Cornell’s College of Agriculture and Life Sciences. Visit http://sririce.org

Olam International is a leading agri-business operating across the value chain in 65 countries, supplying various products across 16 platforms to over 13,800 customers worldwide. From a direct sourcing and processing presence in most major producing countries, Olam has built a global leadership position in many of its businesses. Headquartered in Singapore and listed on the SGX-ST on February 11, 2005, Olam currently ranks among the top 50 largest listed companies in Singapore in terms of market capitalisation and is a component stock in the Straits Times Index (STI), S&P Agribusiness Index and the DAXglobal Agribusiness Index. Olam is the only Singapore firm to be named in the 2009, 2010 and 2012 Forbes Asia Fabulous 50, an annual list of 50 big-cap and most profitable firms in the region. It is also the first and only Singapore company to be named in the 2009 lists for the Global Top Companies for Leaders and the Top Companies for Leaders in the Asia Pacific region by Hewitt Associates, the RBL Group and Fortune. More information on Olam can be found at www.olamgroup.com.  Olam is located at 9 Temasek Boulevard #11-02 Suntec Tower Two Singapore 038989, Telephone: +65 63394100, Facsimile: +65 63399755.

Singapore Olam International stands united with the global community amid challenging times as the COVID-19 crisis continues to unfold and impact all.   In response to the pandemic, Olam and its employees have raised S$1,274,340 for The Courage Fund1 in Singapore. More than 200 employees and members of the Board came together to donate S$637,170, which was matched dollar-for-dollar by the Company. The funds provide relief for those affected by the COVID-19 crisis, particularly patients, healthcare and frontline workers, and vulnerable Singaporeans.  Around the world, Olam has joined forces with its partners and governments to support national efforts on public sanitisation, awareness campaigns and distribution of medical supplies. To address challenges facing local communities, Olam is disseminating information and advice on COVID-19 to farmers through its online platforms, supporting mobile payments to farmers, and providing food packages to frontline workers. Throug
Read more
7th Apr, 2020 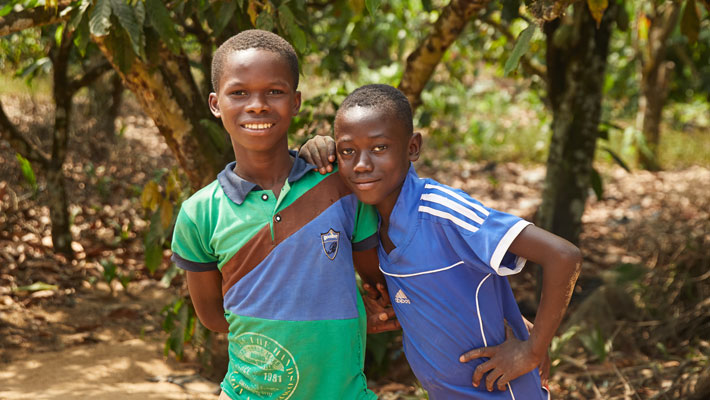 One intervention is not enough in the fight against child labour

Child labour in cocoa producing countries often stems from some really complex societal and economic challenges, from migration and poverty, to proximity to schools and community infrastructure.  The complexity of the problem means one intervention will never be enough – what is required is a broad range of preventative and remedial actions, both at the individual, community and national level. The complexity also necessitates that companies have better visibility of their supply chain and better understand the array of factors at play that create the conditions for child labour. Olam Cocoa has committed to set up dedicated child labour monitoring and remediation systems (CLMRS) across 100 percent of our direct sourcing areas. Earlier this month, we announced a partnership with the Fair Labor Association (FLA) and local cocoa farming cooperatives to digitally register nearly 7,000 farmer suppliers in Cameroon and their households – the first time these measures have been introdu
Read more

Want to get the latest from Olam? Subscribe for latest updates.