Ending hunger is in everyone’s interest. Succeeding in this Goal #2 of the UN’s Sustainable Development Goals means not only ending the misery and debilitation of the starving and malnourished, but also stemming the spread and persistence of disease, and enabling at least 2 billion people, if better nourished, to be more productive for themselves and for everyone.

Hunger is like a huge anchor that impedes the forward progress of economies, societies and cultures, and it can precipitate political instability and human migrations. Happily, there is a solution under our feet if we are prepared to work more respectfully and knowledgably with the invisible life in soil systems.

Today’s economic, social and biophysical conditions for food production are different from those under which the ‘Green Revolution’ was made, lifting millions out of hunger in the preceding century. Accordingly, our technological and institutional strategies, our policies and thinking for ending hunger need to be different now. Land for agricultural production is being lost to urbanisation and degradation caused by soil erosion and salinisation; arable land per capita in 2050 is projected to be about one-third of what it was in 1950. Land-extensive strategies are becoming relatively less justifiable. Adverse impacts of climate change will make food production more difficult and more subject to the hazards of extreme weather, especially on increasingly marginal lands. There is need for climate-smart intensification of production.

What’s more, most agricultural inputs are becoming more costly, and water insufficiency and insecurity are becoming more widespread. Food-insecure households need to have access to technologies that are low-cost and help them produce more food without undermining ecosystem resources and services. The adverse environmental impacts of ‘modern’ agricultural practices can no longer be ignored. We must be more concerned with the health and quality of our soil and water resources, and also more attentive to the conservation of biodiversity, below-ground as well as above.

These challenges are drastic and dire. It is not plausible that we can succeed simply by doing ‘more of the same, but better.’ But this does not mean simply replacing the status quo with a different agricultural technology or production system. That is not possible, and also not likely to succeed. While advances in biotechnology will be needed and attempted, they are unlikely to be achieved quickly enough or widely enough, given the complexity and inertia of both man-made and natural systems.

There are some grounds for optimism, however, as there are some productive, low-cost, climate-smart approaches available for increasing global food production in ways that deal with, or are not impeded by, the challenges facing our agricultural systems.

One such alternative is the agroecologically-based production system known as the System of Rice Intensification (SRI), first pioneered by the work of a French Jesuit priest, Henri de Laulanié, SJ, in Madagascar three and four decades ago. Backed now by extensive research, this methodology increases paddy yields of new or traditional rice varieties by 20-50% (but often by much more), while reducing water requirements by 25-50%, and with lower, or even no, purchased inputs. Farmers’ incomes benefit from lower costs of production (and often lower labor inputs) and boosted yields. Vitally, the resulting plants have demonstrably greater resistance to pest and diseases and to adverse climatic conditions.

Does this sound too good to be true? I thought so at first, but my skepticism led me to find out how and why SRI management methods actually work. These results are being reliably attained already in over 50 countries and are increasingly documented in the scientific literature.

Although SRI was developed for small-scale, resource-constrained farmers, the mechanization of SRI production has been developed so that the benefits of SRI principles and insights can also be reaped in larger-scale operations, with reductions in both labor and water requirements. Perhaps the best news is that the ideas and methods of SRI can be and are being adapted with similar benefits to other crops such as wheat, finger millet, sugarcane, maize, mustard, various legumes, and some vegetables. With the broader System of Crop Intensification (SCI), it is possible to get more productive and robust plants (phenotypes) from given varieties (genotypes) for many crops.

Recognising the achieved and potential impacts of SRI on combating hunger, the SRI-Rice center based at Cornell University was in March of this year awarded the first Olam Prize for Innovation in Food Security by an international jury at Montpellier, France, for their work promoting research and facilitating knowledge-sharing on SRI.

More work needs to be done to understand more fully why SRI crop management achieves such remarkable results, but evidence is starting to accumulate that better crop plants can be attributed first to their superior growth and performance of root systems, which are easily seen and measured, but also more profoundly to the invisible life in the soil. I am increasingly certain that SRI methodology helps mobilize the services and protection of beneficial soil microbes and other under-ground organisms such as earthworms and mites.

Just as we are learning that human growth and health depend intimately on the microbiome that exists around, on and inside our own bodies, it is becoming evident that healthy, productive and resilient agriculture is crucially dependent on the plant-soil microbiome. And considering that malnutrition and hunger abets the spread and persistence of disease, these invisible microbiomes are more connected than we may have thought.

More information on SRI can be obtained from the SRI-Rice website and soon-to-be published book ‘What Is SRI? Responses to Frequently Asked Questions’, a free PDF of which will be available on the website.
A comprehensive list of further reading and resources on SRI and SCI is available here. 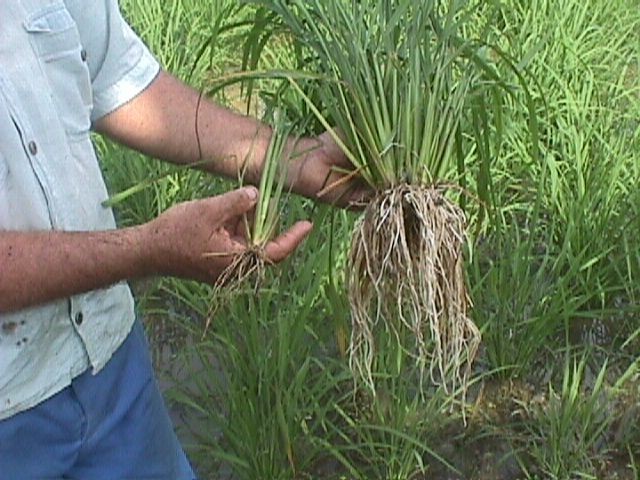 CUBA — tillering and root growth: Two rice plants of the same age (52 days after sowing) and same variety (VN 2084) that were started in the same nursery at the same time. The plant on the right was removed from the nursery when 9 days old and transplanted into an SRI environment: single plants per hill, wide and square spacing, no continuous flooding, and enhancement of soil organic matter. The plant on the left, which had just been removed from the nursery for transplanting, has 5 tillers compared to 43 on the SRI plant. Their root systems are strikingly different in size and color. Photo credit: Rena Perez, Havana. 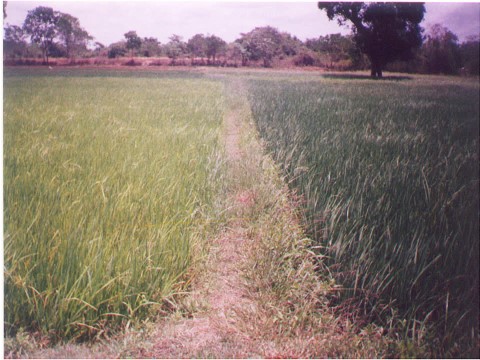 SRI LANKA – drought resilience: Adjacent rice fields (same soil, same variety) three weeks after irrigation has stopped because the reservoir has run out of water due to drought. Plants in the SRI field on the right have developed deeper root systems that can survive tapping residual water supplies at lower depths in the soil. Photo credit: Gamini Batuwitage, Colombo 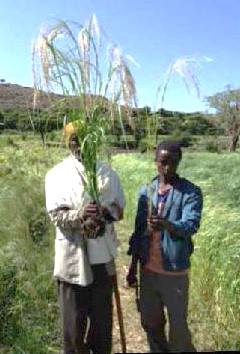 ETHIOPIA – yield increases: These tef plants of same variety were grown on adjacent fields, with the same soil and same climate. The father on left is holding a tef plant raised with adapted SRI methods, transplanting young seedlings, while his son holds one grown with usual broadcasting methods. STI practices give yields of 3-5 tons per hectares instead of the usual 1 ton per hectare. Photo credit: Hailu Araya, Institute for Sustainable Development, Addis Ababa

Norman Uphoff, professor emeritus of government and international agriculture at Cornell University, has been on its faculty since 1970, after completing his PhD at the University of California, Berkeley. For almost 20 years he chaired Cornell’s multidisciplinary Rural Development Committee; and in 1990 he became director of the Cornell International Institute for Food, Agriculture and Development. This experience over the next 15 years drew him increasingly into agricultural concerns, and from 1993 on his engagement with the System of Rice Intensification (SRI) developed in Madagascar involved him with agroecology and particularly soil biology.

Uphoff published in 2002 an edited volume on Agroecological Innovations (Earthscan Press) growing out of an international seminar which he led at the Rockefeller conference center in Bellagio, Italy.This was followed by a volume on Biological Approaches to Sustainable Soil Systems (CRC Press, 2006), for which he was managing editor with 102 contributors from 28 countries. This consolidated his transition from applied social science into the agricultural sciences. In March 2015 -- on behalf of SRI and the SRI-Rice Center at Cornell -- Uphoff received the first Olam Prize for Innovation in Food Security, awarded by an international jury constituted by the Agropolis Foundation in Montpellier, France. 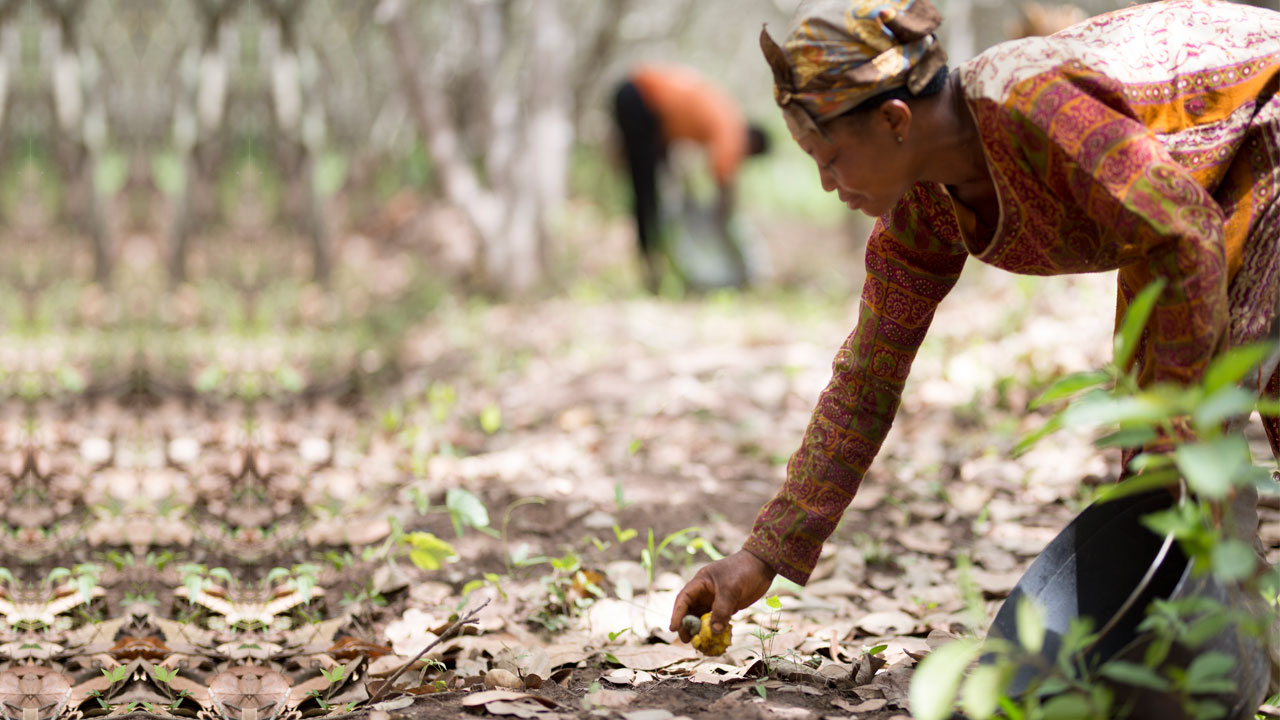 London Today Olam Food Ingredients (“OFI”), one of the world’s largest suppliers of ingredients* from almonds to black pepper, has published sustainability targets to tackle the biggest challenges in the global cashew supply chain, starting with farmer livelihoods. Cashew farmers are among the poorest in the world. Most are smallholders in rural areas across Africa and Asia and cannot always grow enough to feed their families, afford much-needed healthcare or send their children to school. OFI, which has directly supported over 50,000 cashew farmers over the last decade, hopes to change this and encourage others in the sector to collaborate for measurable change. The Cashew Trail strategy sets 2030 targets across OFI’s cashew business – in line with the United Nation’s Sustainable Development Goals1 and OFI’s commitment to deliver naturally good, sustainable ingredients. These include ambitious goals to fight poverty by increasing avera
Read more
Twitter 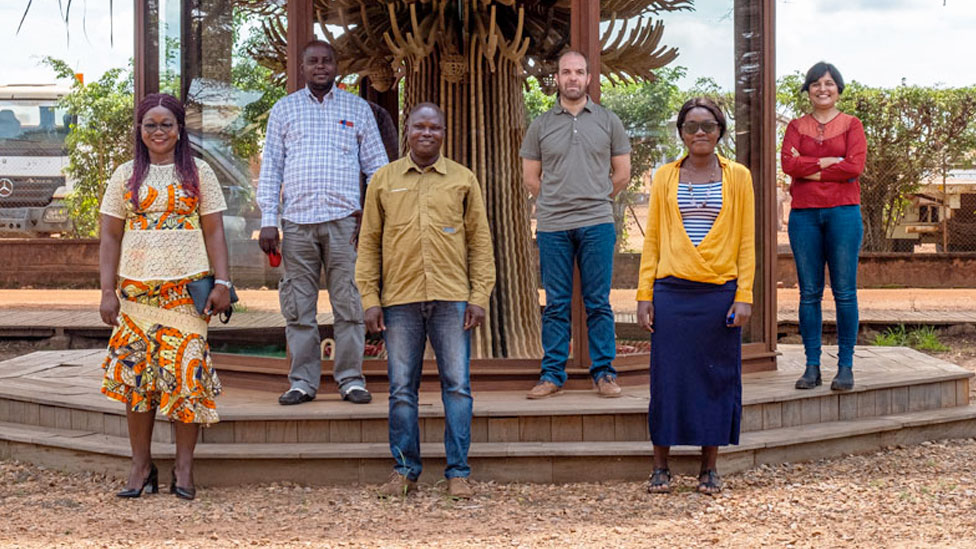 Operating in the north of the Republic of the Congo, Congoalise Industrielle des Bois has been present in the region since 1968. The Corporate Responsibility and Sustainability team of CIB have immense knowledge about the region. Every week they go out on the field to sensitise the communities and indigenous populations on various themes pertaining to health, safety, rights, and family related issues. Earlier this year, we launched Project OKA, where audio related to various topics was recorded in Lingala and Mbengele in questions-answers format, and saved in devices for the communities to listen. However, there is a human element in these visits that no device or technology can replace. When the members of the social teams return, they report their observations over discussions or emails to the team. This deep understanding of the region is always supported with pictures, videos, audio interviews. However, this fragmentation of the knowledge, and the loss in narrative when the emplo
Read more
Twitter 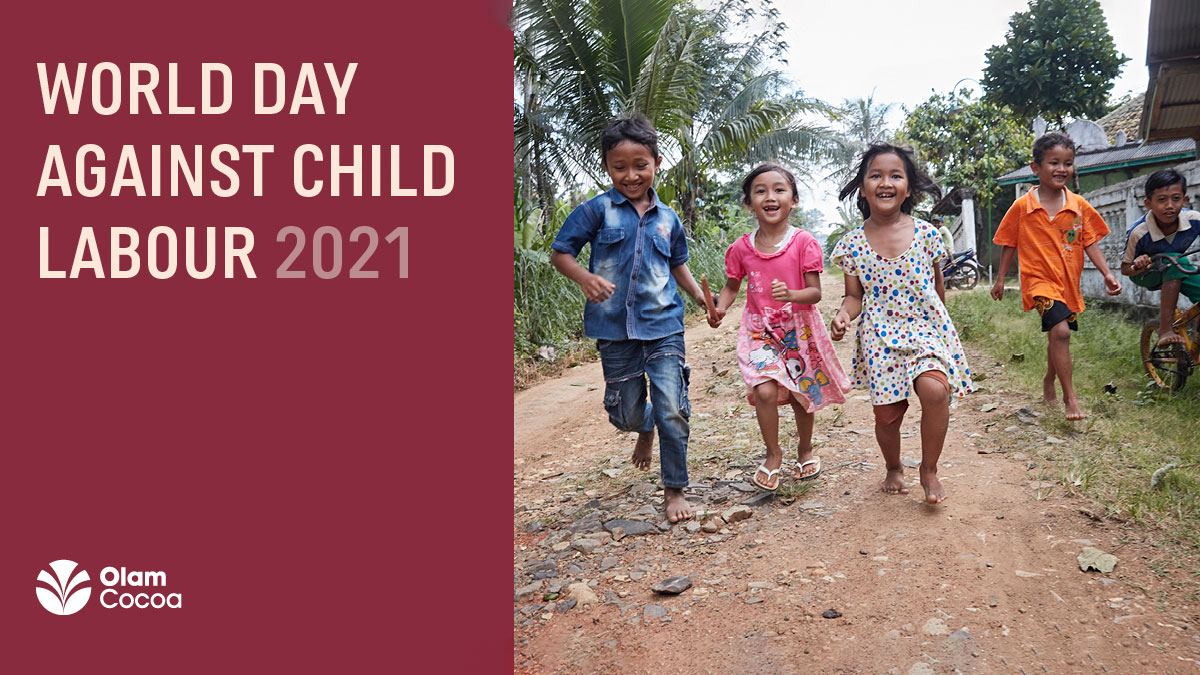 By Andrew Brooks, Head of Cocoa Sustainability, Olam Food Ingredients (OFI)   This week, the world’s attention turns to a heavy burden that can damage a child’s health and education: child labour.  In OFI’s cocoa business, we are focused on solving this problem every day. Most child labour in cocoa relates to children carrying out hazardous tasks on the family farm, distinct from the much rarer issue of forced labour, and has no one cause. Labour laws can be misunderstood, and schools might be located far away. Even if there is a school nearby, children may not have the documents they need to enrol. When combined with rural poverty, many parents think their child’s time is best spent helping on the farm. And now, these cocoa-growing communities are also battling a global health pandemic. We’re working to tackle each of these challenges in turn. Under our Cocoa Compass sustainability ambition, we aim to completely eradicate child labour from our direct supply chain by 2030 and ens
Read more
Twitter